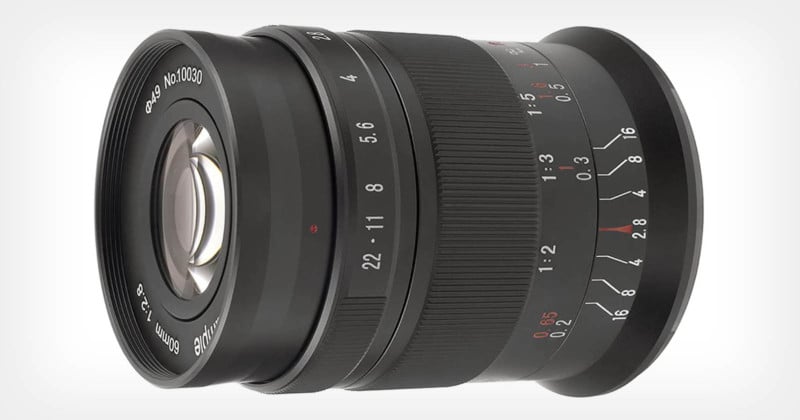 The 7artisans 60mm f/2.8 II APS-C is a lens designed specifically for crop-frame mirrorless. Instead of just a ported mount, there’s no image circle wasted. The design itself is a big upgrade that makes the Mark I look like a weird prototype in comparison.

The most notable change from the Mark I is the internal focus — no more extending barrel, which is a problem I see with the majority of macro lenses. Laowa had been safe from this lately and now 7artisans came out with this updated lens as well, and I’m happy about it. 7artisans also managed to shed a lot of weight and it went from 550g (19.4oz) to just 339g (12oz) now, another welcome change, especially if you like to shoot with small bodies.

Note: If you prefer this review in video form and to see some clips of the lens in action, check out my 10-minute video review (my main macro setup is still MFT but I’m always curious about testing Fuji gear):

It also continues to be a low-budget lens, costing only $179. Prices this low usually get people asking “Is it a safe buy or a waste of money and I should just save for something better instead?” My conclusion is that it’s a safe buy.

Among manual APS-C lenses, I personally think only the Laowa 65mm wins for its 2x magnification, but it costs more than double the price of the 7artisans 60mm and 2x might not be a necessity for the majority of photographers. You can also of course increase the 7artisans magnification with tubes or filters (as you’ll see later), at the expense of losing infinity focus.

The body is all metal and solidly built. The 9 aperture blades create a surprisingly high-quality bokeh that impressed me with its smoothness — I was used to the more hexagonal shapes of the Laowa 50mm bokeh lately (on MFT).

The aperture ring would be better for me if it was clickable, especially since the aperture I shoot most of the time (f/16) doesn’t have its own stop marked — instead it’s just a small intermediate gap between f/11 and 22. This makes me check if it’s still sitting at the last aperture used every time I stop to shoot something.

The focus ring is super smooth and I can turn it just by flicking my finger. I like this as I shoot single-handedly, but do note that the throw between 1m and infinity is very small, so if you plan to use it for portraits, be aware it will be very sensitive.

I’m using the Fujifilm X-T2 for this review as well as raw demosaic in Iridient and processed in Lightroom, without AI enhancements. This wolf spider on my hand was one of the first shots I took the day it arrived from 7artisans, and I was confident right away with the quality it produces even to the edges of the frame. You can see it in the respective crops below:

Another photo that ‘wow-ed’ me was this fly later:

Also note that despite me praising the image quality, it’s not optically perfect wide open — there are minor optical flaws at f/2.8 that don’t matter for me as I shoot stopped down. From my results, there’s plenty of sharpness from corner to corner wide open but actual peak sharpness is achieved only at f/8 (although between f/5.6 and f/11 the differences are very minimal).

There’s also a small amount of longitudinal aberration that appears to only clear up completely at f/8. Outside the tests, I didn’t even notice flaws in actual photos as I barely shot it with wide apertures. The few shots that I did still impressed me with the quality in real-world subjects.

The working distance is about 8cm (~3.15in) from the tip of the lens. It’s what I’d expect for a 90mm equivalent and that’s plenty for me. There’s enough headroom to increase magnification with attachments.

After limiting myself to 1:1 for some time for the sake of this review, I began using a Raynox MSN-202 super macro add-on lens and got a magnification more to my liking. It’s an overkill +22 filter (that also adds a bit of corner distortion) and most of the samples I’m publishing next with it were not shot at the maximum magnification possible with this setup.

It’s the only Raynox I could fit with the stepping rings I already had, but I recommend a weaker diopter like the Raynox DCR-250 to pair with this lens if you’re also looking for more mag. All the photos beyond this point are samples shot with the filter.

My conclusion is that the 7artisans 60mm f/2.8 II APS-C is a good lens, especially in the context of its low price. Only two things stop it from being better for me: the lack of electronic aperture control and having just 1:1 magnification.

No other manual APS-C lens has aperture coupling, and the first one that comes out with it will get a lot of praise from me regardless of whether makes the lens more expensive. It makes a world of difference in how easy it gets to judge focus with the screen showing a big aperture when you mean to shoot stopped down. Without aperture coupling, the usability is the same as adapting vintage lenses, with the advantage being lighter weight and a more balanced setup as you don’t have the lens further away from the mount.

As for being not content with just 1:1, it’s subjective and it might be enough for most people — as you saw from my samples, it’s perfectly capable at 1x. It’s me who unavoidably needed attachments to increase magnification as the majority of my subjects are tiny.

Finally, I recommend you get a separate lens cap for it, as the original that comes with it is the ‘fit around the lens’ kind that isn’t very secure and you definitely will want to get a proper snap/pinch cap.

I hope this review helps to clear up doubts you might have had about this $179 lens and its capabilities.

P.S. If you’re interested in it you can purchase the lens directly from 7artisans or through my affiliate link (for which I receive a small percentage of sales).

About the author: João Burini is a photographer, biologist, birdwatcher, and 3D artist. The opinions expressed in this article are solely those of the author. You can find more of his work on his website and Instagram.