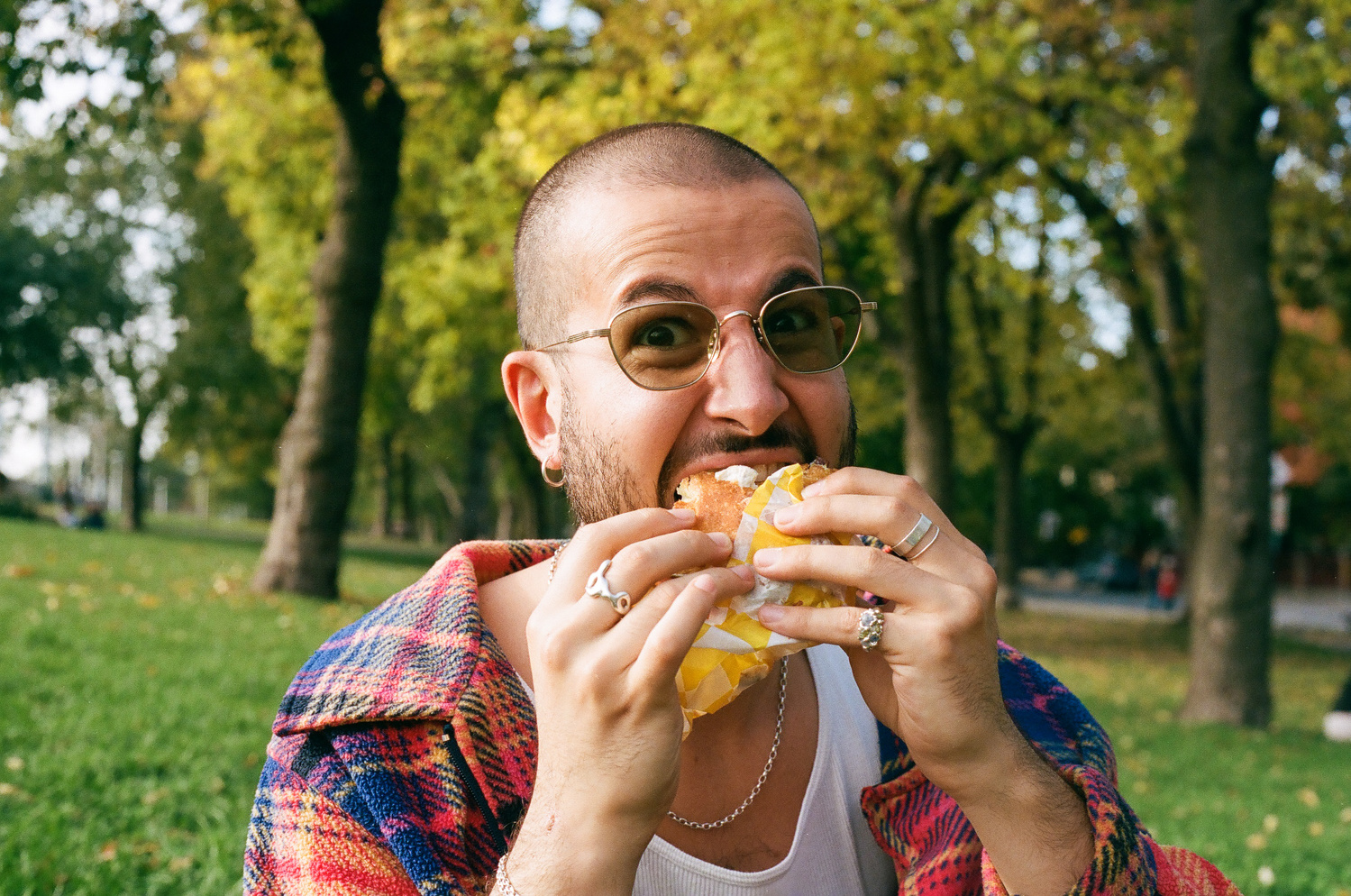 The unifying thread which first attracted me to Hugo-Victor Solomon’s work is the honesty and candidness of his portraits.

Hugo, originally hailing from Seattle, Washington, now resides in Montreal, Canada where he creates affective photographs with a focus on portraits. To clarify, affect can be thought of as emotions or subjective experience.

Hugo began photography in 2016. He had a heavily documented childhood with both parents taking many photos of Hugo and his siblings. He has a “photographic memory” — in the sense that photographs act as meaning and have a certain intention stored in them. Familial documentary images act as a sort of repository for emotional energies. Or as the photo theorist Roland Barthes might put it, there is a certain punctum stored within these images.

His upbringing established an interest in documentary-style portraiture. When he eventually received his first camera, which was coincidentally his sister’s old camera, he could finally articulate visual language in a way that his camera phone at the time could not. He started taking more and more images.

I love taking photos of my friends… doing photos for other people.

Hugo mentions that he has a difficult time in social situations.

I’m too shy to contribute. I’m very neurodivergent. I very much struggle in social situations. I experience autism-spectrum disorder, among other conditions. It manifests as extreme social anxiety.

With a camera, however, he is able to better relate to people. Through photography, he can contribute to social settings as well as better understand others. He confesses that he watches and stares — always looking and searching for something.

Being both queer and neurodivergent makes his work both very queer and tender — there is a certain focus on the self and self-portraiture. All photography is a type of self-portraiture: the most genuine images carry an aspect of the photographers’ essence and what they saw. To elaborate, he highlights that photographers who see models as strictly bodies and photographers who see their own bodies as irrelevant doesn’t feel right to him. He feels that artists and models and subjects and muse are all interchangeable and everyone should be able to not limit or segregate these aspects of the self. Don’t label or presume yourself in the ‘wrong’ way. This is how creatives have operated traditionally, but it shouldn’t be this way. It doesn’t have to be this way.

I’ve always photographed in a way where I instruct the subjects I photograph to move fluidly. I find beauty in the in-between micro-expressions that people have or that little bit of affect that is there and then it’s gone.

In contrast to this, Hugo strictly works from pose to pose and won’t move until he knows what his next pose is. He doesn’t pre-plan poses as such and lets them happen spontaneously during the photographic event. There is so much to everybody that is not within our control. So by working in this way, he hybridizes posing by controlling the pose but letting each pose happen organically. It’s a push and pull of allowing a space of openness that is right for him and works for him.

Additionally, much of his work, especially his self-portraits use nudity as a tool.

Often working on location comes with a set of inherent challenges. He offers the advice to get a tripod if you do plan on creating self-portraits. It’s really annoying to do it without a tripod. He’s done self-portraits in mountains and jungles, wheat fields, and literal snowstorms. The point is to be in these locations and to really be within the landscape. There is indexical documentation of being within a place and using that as an extension of truth.

You need to be candid with yourself. What is in your head translates to the image.

I would say 99% of my photos are in the moment because I have a camera and I see something that I want to take a photo of.

It’s really frustrating to create art sometimes where viewers aren’t trying to look strictly to the surface. Or try to see the immaterial behind the material. That is to say, art is the expression of nuance and often people don’t take the time to appreciate multiple perspectives. An image isn’t just what is in the photograph, but rather sits within a certain context. There might be things that aren’t visible within the frame or may have happened since the time of the image being photographed which still instill in the image a qualitative context.

That is to say, it might be a picture of something — but it’s not strictly just a picture of that thing. There is more to it than what is shown within the frame.

Art requires you to make room within yourself to appreciate something else.