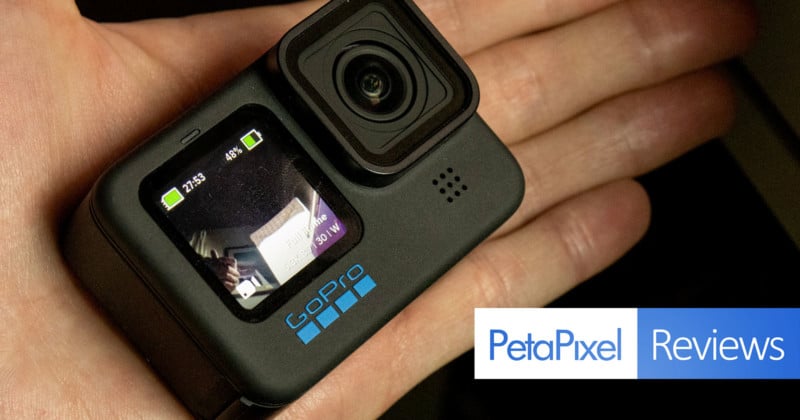 In what has become a somewhat predictable annual release schedule, GoPro’s new Hero11 camera doesn’t deviate much from the formula. If you are already a fan of GoPro, you’ll probably love what is on offer here.

The exterior of the GoPro Hero11 Black is essentially identical to last year’s Hero10 Black. If you haven’t been paying close attention, it’s been years since GoPro added a larger battery and a front-facing display. It’s clear that GoPro is happy with the overall size and shape and layout of the design, as it’s been unchanged for some time. The price is the same as last year’s too: $500.

For my personal taste, I don’t have many complaints about that. There is a power button, a button for recording, and a waterproof hinge that will open up to reveal the battery and micro SD memory card slots. It’s very simple to navigate the physical setup.

Of course, this means that there’s a strong reliance on software menus and touch buttons. As time goes on, GoPro keeps adding more features that require more swipes and taps in the menus. It’s starting to be a little much, and at some point, I think GoPro could benefit from adding an additional physical control to get a handle on things.

The bottom of the GoPro Hero11 Black features a collapsable, two-prong mount that allows many previous GoPro mounting accessories to be compatible with the new camera.

Image quality and the sensor itself are the big stories with the GoPro Hero11 Black. This camera now sports a Type 1/1.9 sensor that has a 8:7 aspect ratio. In a new video mode, we can actually take advantage of this near-square sensor and record 8:7 videos in 5.3K. This allows for a lot of flexibility in post to be able to crop scenes either vertically or horizontally, depending on the medium it will be shared on.

It also extends the capability of horizon-lock shooting, and now with the mode enabled, the camera can rotate a full 360 degrees without the horizon ever going askew. In last year’s model, the limit was 45 degrees.

It’s only a matter of time until mirrorless interchangeable-lens cameras start incorporating sensors like this, and GoPro is in a pretty good position to be able to say they were earlier than everyone else to do it. That said, the GoPro also offers straight-off-the-camera regular framing sizes too. In 8:7 mode, it can record up to 5.7K at 30p or 4K at 60p. In 16:9, it can go up to 5.7K 60p, 4K 120p, or 2.7K 240p.

Another big draw — perhaps the biggest for more serious shooters — is the upgraded 10-bit video. Having more color depth allows for better results once the footage is processed and the colors are pulled around in editing. Since action cameras are generally set up once and left unmonitored throughout a take, having this added flexibility toward clean editing is a very good thing.

There will be some videographers who will pick up the Hero11 Black just because of this color quality improvement.

In stills mode, the photo resolution is 27 megapixels, a gradual step up from the 23 megapixels seen in the Hero10 Black last year. The photo quality is pretty good as well, though just as I said with its predeceessor, the images still clearly look like they were taken with an action camera or smartphone. That’s probably good enough for folks most of the time, though.

Competent as Ever, But No Shake Ups In the Formula

At this point, GoPro is rolling on ahead with a Hero formula that it has been refining for generations. It seems to be working for the company, otherwise, I’d expect more daring changes that would better entice the crowd that has been over the GoPro look for just as long as the cameras have been around. The 8:7 ratio sensor was a surprising change, and it goes to show that even though most year-to-year Hero changes are incremental and simply another stepping stone, GoPro can still flex some imagination.

Alongside the GoPro Hero11 Black, the company is also releasing a Hero11 Black Mini. If the standard size is too big or you just want a simpler camera experience with a built-in battery and a smartphone app to control a lot things, then the Mini will be worth checking out.

GoPro releases a new Hero every year, so it’s simple enough to look at last year’s model or the previous one to that to see what the differences are. In my opinion, the new Hero11 Black is a great camera, but it’s not wildly better than a year ago. That said, the aging processor of the Hero9 would make the upgrade to the Hero11 quite noticeable, and I don’t recommend buying a Hero9 now unless it’s on some kind of a fire sale.

Another alternative I’ve come to enjoy is the Insta360 One RS. This action camera thinks outside the box a bit more than the GoPro and uses swappable modules. This allows me to go from shooting with a 360 camera to shooting with a normal action wide-angle camera just by swapping out the module. The image quality isn’t as good as what GoPro is offering, but it’s more flexible in getting variety.

Yes. GoPro has not introduced any flaws or made any type of big design change, which can only mean that I would recommend buying it once again. However, if a GoPro was never your thing to begin with, this new model isn’t going to change that opinion.