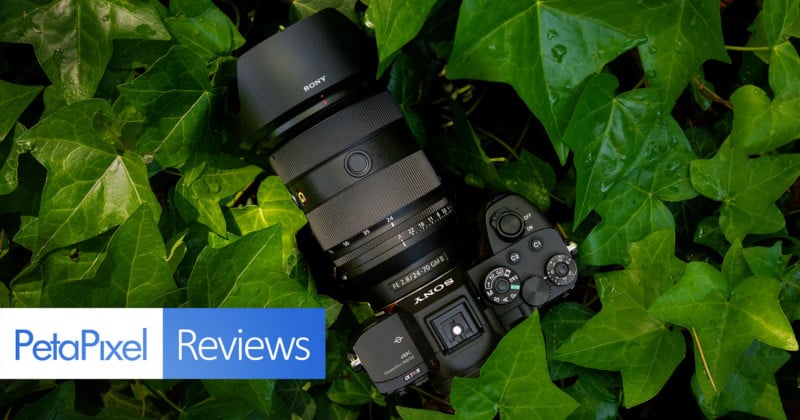 Finally, six years after the original launched, Sony has updated its 24-70mm f/2.8 G Master lens. The original has lagged behind competitors for some time, but the long wait for a successor is finally over.

The Sony 24-70mm f/2.8 G Master II is just the second G Master lens to receive a Mark II version and while it promises better image quality, more emphasis on filmmaking capabilities, and is smaller and lighter, the company says it won’t be replacing the first generation lens in its lineup; both will continue to be sold.

Sony says this new lens is the world’s smallest and lightest constant aperture standard zoom (it wouldn’t be a Sony announcement without some kind of “world’s first”) and it has been redesigned with the latest technology. Everything from the lens elements, the optical arrangement, the lens actuator, and the lens chassis has changed, so while it may look a lot like the first version of the lens, just about everything is different.

Overall, the lens has an 18% reduction in volume (695 grams versus 886 grams) despite the changes to the optical formula and the autofocus motor. This new design features 20 elements in 15 groups — two more elements than the Mark I version — which includes three aspherical elements, two extreme aspherical (XA) elements, two ED elements, and two Super ED. The lens focuses internally but does physically extend when zoomed.

Autofocus is driven by the XD linear focusing system, which brings the 24-70mm f/2.8 G-Master II in line with the other high-end lenses produced by Sony in recent years and is a significant upgrade over the Direct Drive SSM actuator of the first lens.

So with all the on-paper specifications out of the way, let’s get into how it handles in the real world.

Given how much lighter the new Mark II version is on paper, it’s no surprise that in the hand it feels as much. One thing that remains the same size across both models is its 82mm filter threading.

Comparing both Sony 24-70mm f/2.8 GM models side by side in person, it’s easy to notice the difference, however, I don’t think it’s so dramatic that the older version is now antiquated. It’s a nice advancement of the design, but I can’t see it being the most important factor making people buy it over the Mark I.

Significant improvements and additions have been made to the exterior controls as well. There’s a zoom ring and a focus ring, of course, but now there’s an aperture ring. The manually-adjustable aperture ring can be locked into the automatic “A” mode using the “iris lock” switch so that the camera retains control, or it can be locked into manual mode so there’s never any accidental crossing over between the two. The aperture can also be easily de-clicked by switching the click switch on the lens to off.

Rather than a zoom lock switch like the Mark I version has, the new Mark II model has a zoom tension switch with options of smooth or tight. In testing, the tight setting does do an adequate job of preventing zoom creep, but it’s a more versatile way of accomplishing this than a lock as it can be used throughout the zoom range. Lastly, there’s an AF-MF switch to quickly toggle between the focus modes and two buttons that can be customized in the menu to one function.

As mentioned, the optical arrangement is very different here than in the original. The inclusion of the XA elements is what set apart the G Master series from other Sony lenses, and the outcome is clean out-of-focus areas with little to no onion rings or hard edges. Helping to create perfect roundness in the bokeh is an 11-bladed diaphragm.

Testing the sharpness of the lens at the center of the frame from close range to accentuate issues, the wide end shows good results from f/2.8. Stopping down to f/4 is a good improvement, and by f/6.3 I see it at its sharpest. It continues to perform surprisingly well entering into the diffraction range of apertures with f/22 only taking a little bit of a hit to sharpness. Looking at the telephoto end in the center of the frame, f/2.8 is okay, and by f/5 it is certifiably sharp. It seems to peak around f/8 and f/9, and it once again continues to maintain good sharpness in the hazardous range of diffraction.

The corners are more of a letdown, and at the wide end, f/2.8 doesn’t look great. By f/4 there is improvement and at f/9 it peaks in sharpness. Stopping down further, f/20 and f/22 shows a drop in sharpness but are not as soft as wide open f/2.8. At the telephoto end, f/2.8 was soft. It picks up quickly though and at f/5 it is the sharpest. Unfortunately, it also peaks quickly, and going into f/8 and beyond the sharpness drops considerably.

I did notice some purple fringing that can crop up in high-contrast areas at f/2.8. Additionally, flaring and ghosting regularly appear when shooting into the sun. However, these are both well-controlled and do not spill out into significant areas of the image.

As mentioned, the original model uses a Direct Drive SSM autofocus actuator and the Mark II has an upgraded XD linear focusing system. In practice, while using it with the Sony Alpha 7R IV, I wasn’t overly wowed with the autofocus performance for fast-moving subjects that were moving toward the camera. This could have been a limitation with the camera, and I did not have a faster alternative to test the lens with like an Alpha 9 II or Alpha 1. In easiser situations like panning or shooting a static frame, there were no problems in keeping focus.

The 24-70mm f/2.8 GM II has a minimum focusing distance of 8.27 inches (0.21 meters) and a maximum magnification of 0.32x at the 70mm end. Throughout the zoom range, it feels like almost anywhere in front of the lens hood is fair game to be in focus and if you were any closer you’d be risking accidental contact with the front element.

The Sony 24-70mm f/2.8 GM II makes significant upgrades to the outer body by giving shooters many new ways to control the lens. It’s also shorter and lighter despite the addition of two elements and changing the autofocus motor system entirely. As a Mark II lens, it delivers updates that will make it a compelling workhorse contender for the next six years.

Since Sony doesn’t intend to replace the the original 24-70mm f/2.8 GM in the company’s lineup of lenses with this new model, that one will continue to be sold alongside it. The original was released six years ago and it kicked off the entire G Master series. Made from the best components of that time, it’s still going to be a quality lens. It lacks a stacked set of physical controls on the outside, Sony’s latest and greatest autofocusing actuator, and is slightly larger and heavier. The real benefit comes with being able to pick one up used, something that won’t be dropping the price of the Mark IIs anytime soon.

Yes. With improvements to nearly every facet, the $2,300 24-70mm f/2.8 GM II lens is the right choice for Sony shooters across many genres of photography.

Photo Of The Day By Christoph Stopka

The Importance of Expressing Vision in Photography