The Best CFexpress Memory Cards in 2022 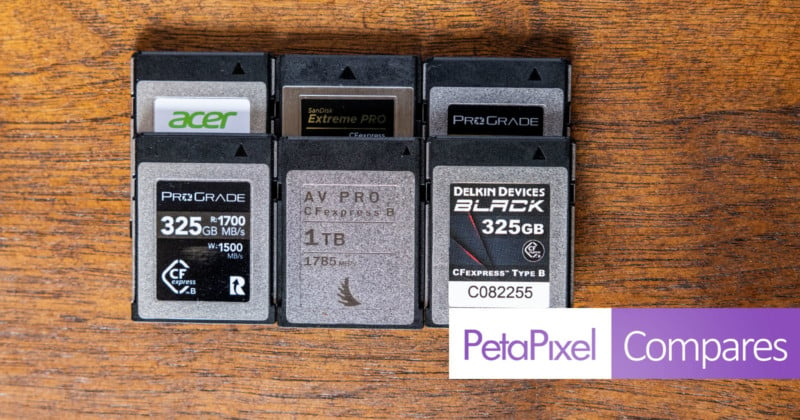 CFexpress has finally come into its own and multiple companies are now producing a wide variety of capacities at a range of prices. But with so many choices, which one should you buy?

CFexpress Type B is, right now, the most common “next generation” memory card format and has all but totally won out over the SD Association’s flawed SD Express format despite its lofty promises. While CFexpress Type A is also coming into its own, only Sony is using the format in its mirrorless cameras and at the time of publication, only three companies are producing that card format.

When more are available, this guide will grow to include CFexpress Type A as well but, for now, the two options from ProGrade Digital and Sony perform basically identically. PetaPixel has not received Delkin’s option to test.

Every other camera company besides Sony that has updated to the latest and greatest memory card format is using Type B, and as such there are a lot more options in the marketplace.

But all that performance comes at a literal cost: CFexpress Type B cards can get pretty expensive. To save you the wallet-ache of making a bad decision, we’ve created a rigorous multi-stage test to put CFexpress cards through the wringer and help you make the best buying decisions.

Below is a list of all the CFexpress Type B cards included in our testing:

PetaPixel will update these results periodically as we obtain more cards, so make sure to bookmark this story and check back when you’re ready to make a purchase.

To evaluate which cards performed best, we subjected each to a series of tests. In the case where a card manufacturer also supplies a card reader, we used paired those products together. If a company did not provide PetaPixel with a reader, tests were performed on the ProGrade Digital CFexpress Type B and SD UHS-II dual card reader.

First, we tested the cards with Blackmagic Speed Test to get numbers for the average peak read and write speeds that can be expected when loading and unloading data to a computer. We then filled the cards at more than three-quarters of each of their capacities and tested the speed again to make sure that adding data to the cards does not affect performance. These tests provide us with a baseline level of performance to expect.

The second test goes beyond peak speeds and looks at sustained speeds, which are a lot harder for memory card manufacturers to hit consistently high numbers. These tests are performed with HD Tune, one of a few industry-standard benchmarks for measuring memory performance, and are shown as an average of read and write speed performance, referred to as transfer speed.

In the third test, we put all the cards in a Canon EOS R5 and asked it to record at 8K RAW for as long as it could. The R5 will overheat after about 20 minutes of recording at this resolution, so if the card is able to continuously log that data for that whole time without dropping visible frames, we logged it as a “PASS.” Basically, if the card is able to record for as long as the camera is able to send it data, it would be unlikely that a photographer or videographer would find any issue with the cards in the field.

The final test is the most relevant for photographers. We tested how many seconds we could fire a Canon R5 at maximum framerate and resolution before we hit the limits of the buffer. We asked the camera to record both RAW and the highest quality JPEG to load it with the most amount of data. This test was performed three times and the results were averaged.

In this test, higher is better. Top performers here go to Delkin and AngelBird based on both the peaks of both read and write performance, although there were multiple cards that performed really well. Acer and Prograde’s Gold series cards performed the worst here, but with speeds that are by no means “bad.”

In this test, higher is better and three brands stood out: SanDisk Extreme Pro, ProGrade Digital Cobalt, and Delkin Black Series. Delkin, in particular, rated the highest sustained transfer speed of any card we tested. Acer scored the worst here as the divide between its best and worst transfer speeds during the benchmark was very wide.

We have not yet tested a CFexpress Type B card that is unable to keep up with the Canon R5’s 8K RAW recording requirements. In all cases, the R5 overheated before a memory card failed.

In this test, higher is better. ProGrade Digital Cobalt, Angelbird AV PRO, and Delkin Black were all within a margin of error, though Delkin eeked out the overall win with an average of 19.43 seconds of continuous shooting before we filled the buffer. ProGrade was hot on its heels with 19.4 seconds.

This might be a good time to mention why the speeds we saw in testing are nowhere near the speeds any of the companies put on the packaging. Just about every CFexpress card promises read speeds at or above 1,700 MB/s, but the best we saw didn’t even get to 900 MB/s peak speeds or go beyond 400 MB/s of sustained speed.

This is because those peak speeds were most likely obtained in laboratory environments with the SSD bus plugged directly into a host PC. While this will give the absolute maximum performance the silicon is able to produce, it’s also not anything close to a real-world situation. Our tests aim to give you a better idea of what to actually expect.

Let’s get to the good news: every card we tested worked to our satisfaction when it comes to recording high-resolution video data. Every card, regardless of the speeds promised, was able to ingest 8K RAW video footage until the camera overheated, which means it’s highly unlikely that anyone would run into any issues with the cards when shooting in the field — the camera will fail before the card does.

Of note, some of these brands promise high sustained write speeds, but none of them seem to qualify for the Compact Flash Association’s VPG400 certification which requires 400 MB/s sustained speeds — which is probably why none of them have that certification unlike the latest card from Exascend or Lexar, neither of which we have tested as they are not yet available. So while AngelBird promises some seriously high sustained speeds on its website and in marketing materials, we weren’t able to replicate them using industry-standard software.

That said, there may be a reason for that. Angelbird is extremely nitpicky about which cards are designed for which cameras which could mean that it does have some kind of special tuning to work with cameras better than with computer software. This seems like a stretch, but we have no way to tell.

For the most part, these cards were all pretty consistent in their performance during our benchmarking with the exception of Acer, which was a lot more frenetic in how much it jumped from high speeds to low speeds and gives us pause recommending it for video workflows.

Some brands separated themselves from the pack in the photography section, however, and there are clear winners and losers when it comes to long periods of burst photo performance.

Almost every card we tested would be able to handle what we consider “normal” burst photo shooting. It is very rare for a photographer to need to fire continuously for 20 seconds and more likely to fire in bursts of five to seven seconds with a few seconds of inactivity in between. As such, the only card we would recommend buyers shy away from is ProGrade’s Gold series, which won’t be able to hold up to what we consider realistic burst photo requirements.

All this means that of the cards we tested, we recommend going with SanDisk’s Extreme Pro, Angelbird’s AV PRO, ProGrade Digital’s Cobalt series, or Delkin’s Black Series. These cards posted excellent performance in both video and photo testing as well as our computer-based benchmarking. You will be safe to pick up any of these, so shop for what is on sale.

Of these, if capacity is your biggest concern, Angelbird is probably the best bet since it currently is the only brand to offer a whopping 4TB in a single card. But if you force our hand and make us declare one overall winner…

The Best CFexpress Type B Card in 2022

If you are looking to buy the best card with the most reliable performance, then we recommend the Delkin Devices Black Series. Across testing, Delkin took the most wins when it comes to performance in our computer benchmarks as well as real-world use cases.

It’s also the most recent CFexpress card to be announced, which has us hopeful that coming cards from competitors will continue to raise the bar on performance. Its only downside is capacity where Delkin offers a maximum of 650GB.