This New Tabletop Game Looks Like D&D for Photographers 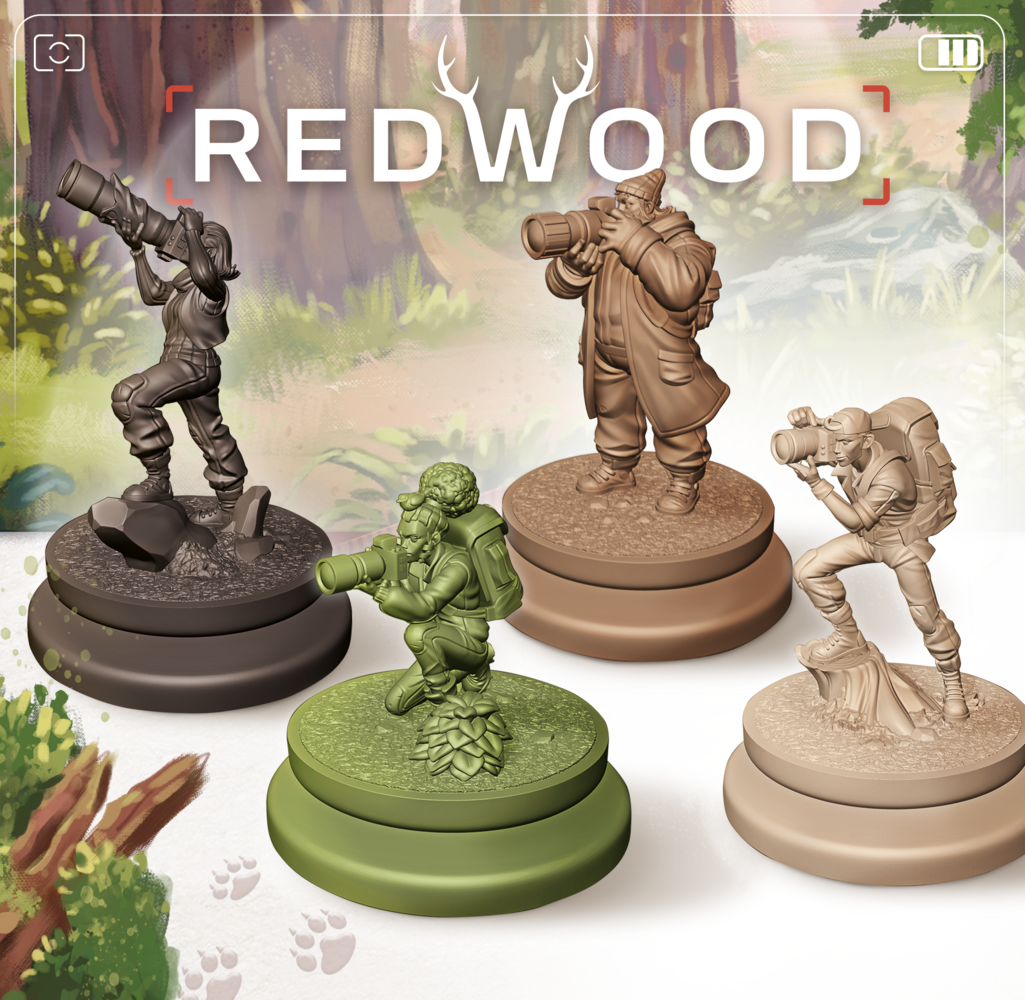 I love photography, and I have more than a passing interest in tabletop games. You can only imagine my excitement when I heard there was a tabletop game being developed which lets you play as a wildlife photographer trying to get the best shots!

The premise of Redwood by sit down! games sounds both simple and a lot of fun!

Redwood is a game of movement estimations and angle of view where players have to take pictures of wild animals to compose the most beautiful panorama.

I became aware of Redwood after Google suggested news articles for me with some perfect targeting, my recent suggested articles have all been on photography, or tabletop gaming as I’ve been dipping my toe back into Dungeons & Dragons of late. I was immediately taken by the concept, and more than a little excited at the renders of those mini figures.

Sit down! describes Redwood as a game of movement estimations and angle of view, where players have to take pictures of wild animals to compose the most beautiful panorama. The game is for 1 to 4 players, from the age of 8 up. The games last about 45-60 minutes.

During their turn, the player will have to choose between different movements and angle of view (materialized by real plastic mini figures) to catch the animals in the picture without disturbing them. Collecting animals and other elements earns victory points, required to win the game. During the game, new conditions for earning points will appear such as the position of the sun, and camera lens selection. The game ends after five turns, and players will be rewarded if they meet certain conditions to earn more points, such as capturing sharp images of a range of wildlife, or capturing a great panoramic landscape.

While it’s not yet available, the people over at Dicebreaker got a sneak peek at Redwood during Gen Con this year, before the game launches on Kickstarter in fall of 2022. Unfortunately the version they played didn’t use those impressive looking miniatures. Die breaker describes Redwood as a tactical simulation of competitive photography which uses mini figures, and field of view templates to show the focal length of various lenses.
The game is already ticking a lot of boxes in areas of interest to me, and I really hope the game proves popular enough for a full release.

Players use curved movement templates to move their character around the map, being careful to avoid disturbing wildlife or the other photographers. The interesting part comes in the rules around movement; you can’t measure your movement first, and once you touch the movement template, then you have committed to moving. Players will need to gauge by eye how to get into the best position to get the shot with their chosen camera setup.

Then comes the equally interesting mechanics of framing the perfect shot. A translucent cone template represents the field of view of your camera. Any landmarks or wildlife covered by the template are considered captured, and count towards the player’s goal. There’s a variety of field of view templates to simulate a selection of lenses your player can choose from. The FOV templates also include small cutouts, which represent the perfect range for that camera. If your subject is under the cutout, you have achieved perfect framing and focus, potentially earning more points.

Adding another level of depth to the game is the sun, which rotates around the playing area, allowing for varying lighting states and facilitating more potential bonuses. Each successful image adds to the picture cards in front of the player. These cards will eventually form a stunning panoramic image of the park illustrated by artist Edu Valls.

Although Redwood isn’t yet available, it has certainly made me interested in the concept of a miniature-based tabletop game with photography mechanics. The artwork looks great, the renders of the minis look superb, and the concept is really interesting. It’s refreshing to see a game being developed in this style where the focus is on shooting wildlife with a camera instead of shooting with weaponry, whether futuristic or fantasy. Redwood looks to be a fun, family-friendly, and accessible entry into tabletop games, and a great way to share the photographic experience on some level with friends and family who may not want to camp out in a national park waiting for deer to appear at sunrise in real life. I’m excitedly looking forward to seeing what happens with this game.

Would you be interested in a tabletop game with a photography theme?

Images used with permission of Sit Down! games