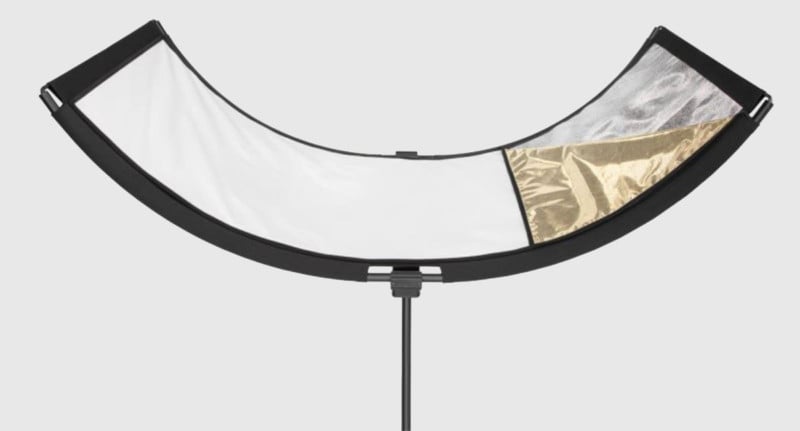 Westcott recently released its third version of the popular specialist tool, the Eyelighter. If you happen to be a working headshot or portrait photographer, there is no way you haven’t seen it, thought about buying it, or even had it in your shopping cart at some point.

Although I have come to love a curved reflector, I have always avoided the Westcott version because of the price point. When the version one was released, it was retailing at $299, which seemed a pretty steep price to pay for what seemed to me at the time to be a gimmick.

Over the years that followed, several other companies have come out with their own versions of the curved reflector at a lower price point and, after trying a couple of them out, I settled on the Glow Arclight reflector from Adorama.

At the time, it was $100 less than the Eyelighter and included two additional fabric colors (white and gold/silver), so it seemed like a good deal. With companies like Adorama and Neewer selling pretty reasonable facsimiles at a lower price point, Westcott had some serious work to do in trying to convince photographers to pick their modifier over the competition.

When I saw that Westcott had released the version three, of course I had to click on over and take a look-see. What I saw surprised me. In developing the newest iteration of the Eyelighter, Westcott appears to have read my mind and addressed my two main problems with their product, the price, and the portability. Now it’s still not a cheap modifier, and it’s still a big, unwieldy pain in the arse of a reflector, but there are some serious improvements on both fronts.

Full disclosure: Westcott provided me with the Eyelighter 3 used for the purpose of this review.

A Better Value Than Before

The full retail price of the Eyelighter has come down over the years from $299 to $199, much more competitive with other curvy reflector producers. Even then, the thing that always gave Glow the edge over Westcott for me was the inclusion of the additional fabrics.

You see, most of my day-to-day work could be described as bog-standard business headshots for LinkedIn and email signatures. A burning hot corona of light in the lower iris isn’t exactly the style most of my clients are craving, so I tend to favor the white fabric over the silver that is standard in previous versions of the Eyelighter.

To get white fabric on the Eyelighter 2, you would have to plunk down $299 and then an additional $60. That’s why the Glow version won me over. In a very nice change of pace, Westcott not only includes two additional fabric options for the base price of $199 (white and silver/gold), but they are much easier to change out than they used to be. Instead of taking the whole dang thing apart, you just lay the other fabric over the top and secure it with the built-in Velcro strips on the edges.

With the current retail now at $199 and the extra fabrics included, the Eyelighter 3 is a much better value than it used to be. Still at the top of the price range, though, with the Glow Arclight II currently selling for $149, and the Neewer curved reflector on offer for $99. If the straight-up price were the only consideration, most people might still opt to save a few bucks and go with another brand. But wait, there’s one more thing.

I’m gonna be really honest, here. The difference between $100 and $200 for a curved reflector isn’t that big of a deal for me. Westcott generally has great build quality to their products, and I have found their service and support to be very good over the years. I will happily choose paying more for something that’s better built, that the company will stand behind, over saving a few bucks. So even though they have added some good value in the new version of the Eyelighter, that alone isn’t enough to make me click the “buy” button.

The biggest problem with the Eyelighter (or any large, curved reflector invented so far) is that it’s a massive PITA to put together and it takes up a ton of space. Even if you have a studio space and can leave it set up, you might find, because of the size and shape of it, that it’s very awkward to store.

If you are like most photographers and work more on location, you might just come to dread the setup and breakdown of a curved reflector. My experience is that it takes about 7-10 minutes to set up and about 5-7 to break down and store properly. Doesn’t seem like a huge deal, but you might discover that you opt for something easier to transport and set up when on location after you have to do it a few dozen times. And wait until you send one of the tiny little screws holding it together skittering under the break room fridge in the office where you are taking headshots.

So far, I have opted to leave my curved reflector set up in the studio and rarely take it on location, even though I love the results I get with it. In the version 3, Westcott has redesigned the frame of the Eyelighter making it a much faster setup and breakdown. Their website claims that it only takes 2 minutes to set up, which I can confirm after having done it myself a couple of times.

The clever adjustment to the design not only includes no tiny screws to lose, but the support poles connect the center of the frame instead of each other, allowing you to assemble the reflector in halves. It’s a whole lot faster than sliding the giant silver sock of fabric over the half-pipe-sized poles, and you can do it without looking like Chevy Chase tripping and knocking over every chair in the room.

Portraits Lit with the Eyelighter 3

Here are some portraits I shot over a couple of sessions using the Eyelighter:

The curved reflector is a specialist’s tool. That is to say, it’s not the best solution in every situation. It does, however, do quite a bit of heavy lifting in the lighting department, and those of us that use curved reflectors, tend to swear by the results. Taking everything into consideration, I would have to say that, for the first time since its competitors hit the market, the Eyelighter is looking like a great choice.

Good value, great build quality and design, and much-improved portability are what you can expect out of the Eyelighter 3.

Image credits: All photos, unless otherwise noted, by Gary Hughes.